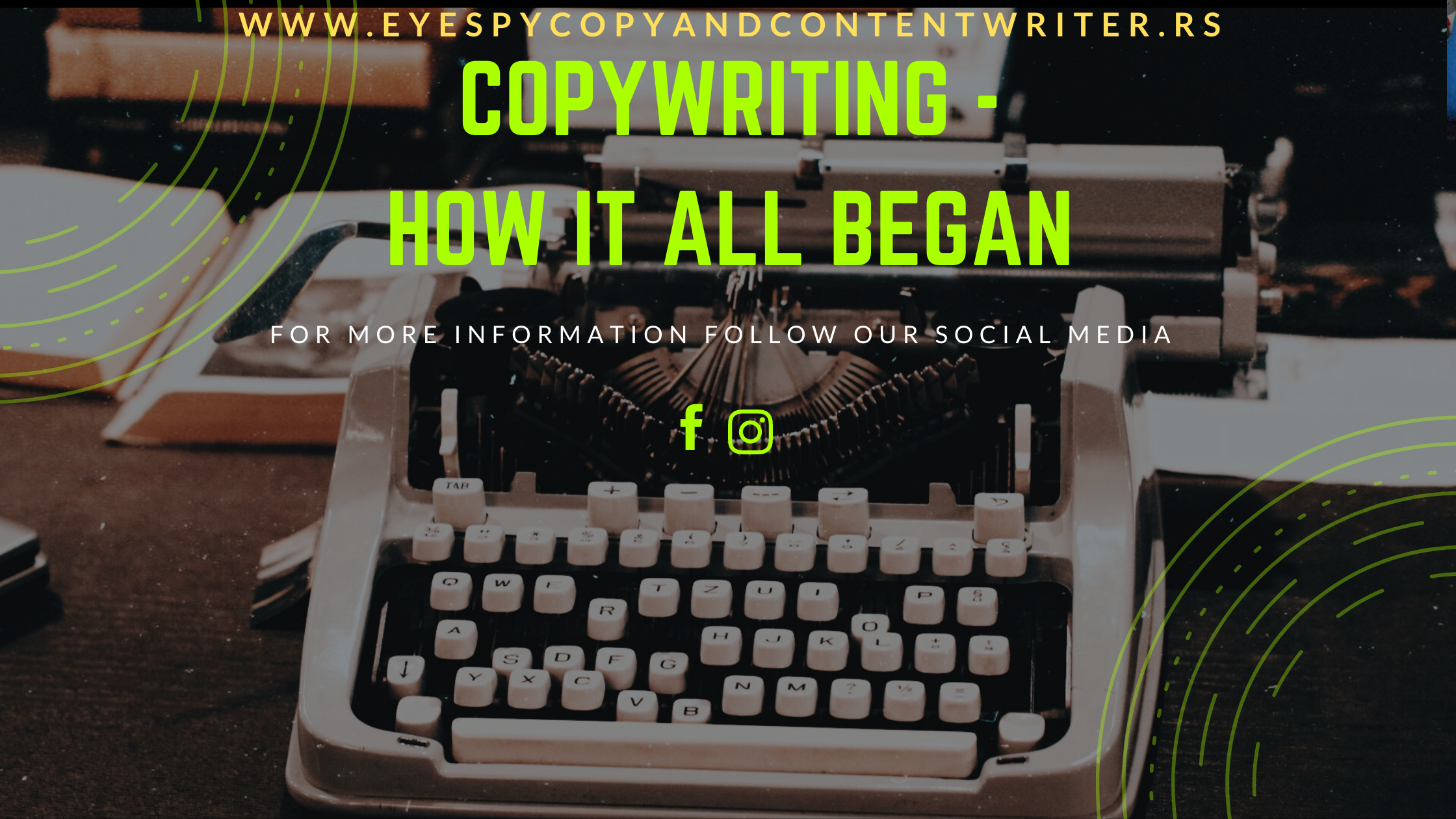 Copywriting is a profession that has been around for quite a long time. It has its origins in journalism, or even some initial forms of advertising. But, in terms of its development, it is no different from any other thing in the world and has greatly improved too. Some of us are familiar with what this job actually represents, other are not. Whatever the case is, we are here to walk you through the history of copywriting, how it all started, and where we are today.

As we will deal with the concept of copywriting in the following blog posts, here we will cover the overall idea of what copywriting is. In a nutshell, copywriting is the science and art of coming up with some creative and imaginative ideas of writing a copy to sell a product or a service. By “copy” we mean a number of things, like:

or any other kind of promotion of a product or s service. Basically, copywriting, as a part of advertising, is a skill of writing of all sorts of promotional texts. It represents introducing the words that will once be printed out in any form of promotion or advertising – in the newspaper, on television, or on the Internet.

How Did It All Start?

It is believed that copywriting has its origins back in the Babylonian times in the late 1470s. In 1477, the first copy was made in form of a prayer book. The writers who created copies at this time wrote on large papers by dipping feathers in ink. This was the time when there were no copy machines of course, so creating each ad was very difficult, as it meant each copy should be written once by one person only. In case there was a need for a larger number of copies, each should have been written again from scratch.

As time went by, the processes of writing have changed too, so brochures and pamphlets came into the picture. In the 1600s, with the invention of mass printing, newspapers became alive and so did the first newspaper called the Oxford Gazette. This was considered a great breakthrough because it was printed on a large format paper, leaving enough space for many advertisements to be placed on it. It meant copywriters could reach more people in a shorter period of time and with less effort.

The Father of Copywriting

What we know as copywriting today being mainly a freelance profession is not how it was from the start. It is estimated that there are over 131.000 copywriters in America today only. The first official independent copywriter appeared in the 19th century by the name of John Emory Powers. He worked for Lord & Taylor and Wanamaker’s department stores and not the newspapers, as was the practice back then. He reached his success by being able to write up to six ads per week that would appear in the newspapers, thus enabling the stores increasing their profits within hours and doubling their annual revenues. Once, he shared the words of wisdom as a secret of his success in copywriting by saying:

“The first thing one must do to succeed in advertising is to have the attention of the reader. That means to be interesting. The next thing is to stick to the truth, and that means rectifying whatever’s wrong in the merchant’s business. If the truth isn’t tellable, fix it so it is. That is about all there is to it.”

He earned his nickname “The father of modern creative advertising” due to his controversial, yet creative ads. This is the time when and person the real value of copywriting was recognized for.

After Powers’ passing away, the person who took over the big role in copywriting was definitely a person named Robert Collier. He reached his success by starting out the daily mail phenomenon using emotional connecting and psychological techniques to reach people. With this, the advantages and effectiveness of copywriting were proven again.

As we mentioned in our previous blog post, the development of the Internet and the modern technology has a great impact on our everyday lives. Thus, we can say that copywriter have undergone some changes in the trends and ways of delivering their work. Instead of writing copies for newspaper ads only, copywriters today use other methods that help them deliver high quality work, like:

However, regardless of how much trends in copywriting have changed from before until the present, there still are some things that have remained the same. For example, the traits or characteristics of all the copywriters ever. They include:

As we can see, the modern times and the development of the modern technology definitely have a huge impact on the world today, but also the way of how copywriting can be done as a profession. Although it does not necessarily mean that all the aspects of this job are different. Copywriters today may use different ways to convey their work compared to how it was done in the past. But one thing is sure, though – copywriting has always been and will remain a profession that will stay alive for as long as there is a need for advertising. And that means forever, or, at least, until the last person walks the Earth.

The 7 Ps of Marketing Mix

What Is Social Marketing?

I am an active woman, both physically and mentally. Someone who is looking for new knowledge every day. A person who likes to spend time with her family. An honest friend. An employed mother. A person who is so serious in her business and work, but at the same time ready to eat a whole bag of gummy candies or sour worms.